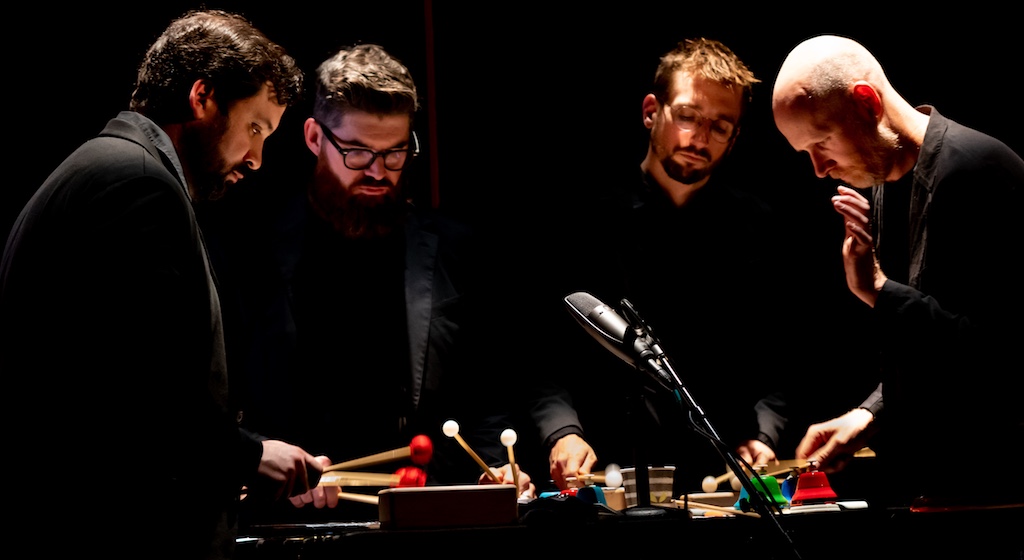 Brooklyn-based ensemble Sō Percussion is set to take their “exhilarating blend of precision and anarchy” (The New Yorker) to Artpark on Sunday, June 13th, from 4 to 6 p.m.. It will be only their second, in-person performance after a year away from the stage. Like many other musicians this past year, Sō’s core members -- Eric Cha-Beach, Josh Quillen, Adam Sliwinski, and Jason Treuting -- found themselves unmoored, especially in the first few months of pandemic lockdown when they “didn't know what to do creatively,” according to Treuting. Eventually, the challenges of remote collaboration helped reaffirm a shared belief in “flexible music” and gave them a renewed appreciation for making music with found sounds.

“All our shows were cancelled and that void felt big,” says Jason. “Then a few months in, we made a version of a piece of mine for Nadia Sirota's Living Music -- “June” -- from Amid the Noise. This music can be played on any instrument, flexible instrumentation. So it made sense for us to grab the sounds we had around our houses -- piano, steel drums, found objects, etc -- and Eric's wife Yeji Cha-Beach joined in on violin. It kinda opened a door and reminded us that we make music in these ways often. It was a life saver!”

Fellow member Josh Quillen said it “reinforced the idea that collaboration and music making can be done under any circumstance. I will say that I prefer in-person over remote any day of the week!”

Building on that sentiment, Jason added: “From what I hear from friends who have played up at Artpark it is a special venue with a curious audience and those are the spots we love most!”

And what should attendees of the Sunday afternoon performance expect? Jason told us they should “expect the unexpected!”

“This program of music really shows off percussion as a sensibility,” he went on, “an approach. [In] one piece we aren't even playing percussion instruments, but rather [we’re] playing on a string quartet with percussion techniques and other ways of making sound that came from experimentation. I would hope [they] will come curious to discover new sounds and new ways of making music, and leave having heard four new worlds, some of which you love, some of which you are curious to know more about and maybe some you don't need to hear again :).”

Josh added: “They should expect to hear something they’ve never heard before, and to see and hear four people work as hard as they can to do it at the highest level for them. I hope they feel good to come up and talk to us after!”

“This program is a focus on two composers we've worked with for a while now and becomes a fun pairing of friends of ours and also teacher and student.  We are playing two works [by] Julia Wolfe, one that was written a while back and is a staple in our scene called Dark Full Ride. We will be playing the first part, which focuses on hi hats and cymbals. It is super fun and energetic! The second piece of Julia's is a new work we commissioned, Forbidden Love, for string quartet. The instruments (2 violins, viola and cello) are amplified and all kinds of wild sounds are coaxed from the quartet.

One of the last shows we played before the pandemic was in Trinidad, playing Kendall's Melodic Concept iii in our show at the University of Trinidad and Tobago. It was a life-changing experience! [The June 13th Artpark show] will also feature a newer work of Kendall's called Walk/March/Run that we commissioned with a consortium of great percussion groups (Sandbox Percussion, Matchstick Percussion, University of Akron and Bard College Conservatory). We made a huge ensemble version online and this will be the first time we play a quartet version live. A premiere!!!! We are pumped for that!”

Asked about what he hopes Artpark visitors come away with after the performance, Josh offered these words:

“Just re-embrace live music for what it is: a one-time event that will be like no other.  And enjoy each other’s company. It’s what I’ve missed the most this year.”

Sō Percussion’s performance is part of Artpark’s summer music series New Music In the Park. It will take place on the outdoor Emerald Grove stage Sunday, June 13th, from 4 to 6 p.m. Tickets are $12. Click here to purchase.