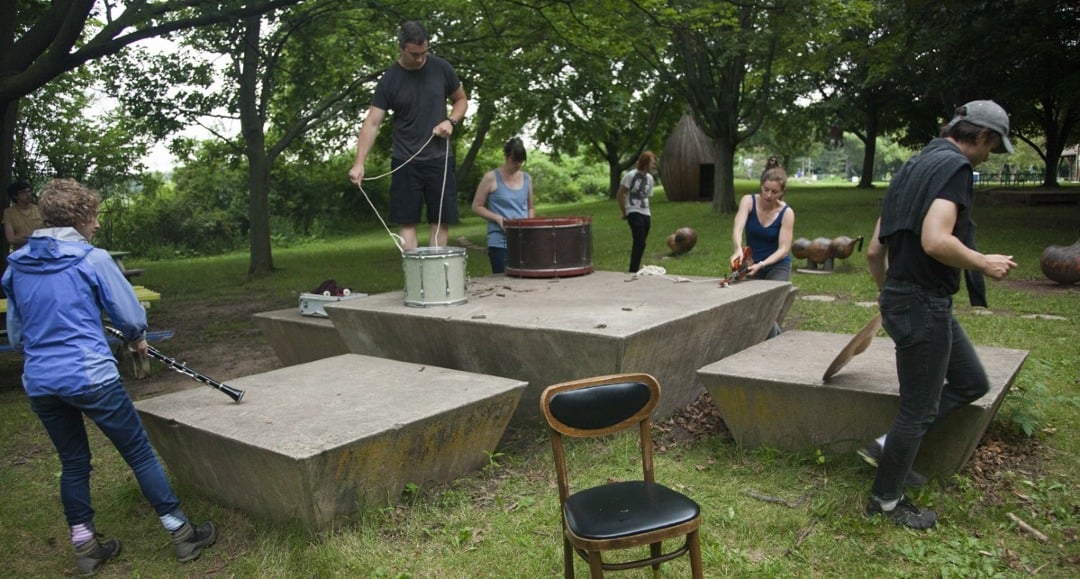 In physics, a null point occurs when two or more opposing quantities cancel each other out.  Null Point is also the name of the Buffalo-based artist collective performing in Artpark's Emerald Grove, Saturday, July 10 (4 to 6 p.m). Their Nature Is Not Natural explores what happens in spaces where seemingly contradictory ideas meet — using sound, language and visuals to re-contextualize our understanding of the public park, for instance. Null Point: Nature is Not Natural is part of Artpark's adventurous New Music in the Park series, and is also part of the legacy of Creative Associates of the University at Buffalo’s Center of the Creative and Performing Arts.

We sat down with Colin Tucker, composer and Founding Artistic Director of Null Point, to learn more about the group’s foundational concepts, and to get his perspective on the work they’ll present at Artpark, July 10. That performance will include a composition by Tucker himself, and scores by Yoko Ono and Ben Patterson.

[Artpark]: What is Null Point? How did it come about?

[Colin Tucker]: Null Point is an experimental music initiative. Specifically, it is a hybrid organization, combining two institutional forms from different artistic fields: the experimental music ensemble and the (contemporary art) curatorial project. The goal is to cultivate lines of conversation between experimental music and contemporary art, in order to open up possibilities that have not yet been investigated by either field; because of this focus on inquiry, we call ourselves a musical research group.

I started the initiative in 2014, out of a desire to create more opportunities for exploring conjunctions of experimental music and contemporary art. Broadly speaking, I felt that performing arts institutions didn’t have the knowledge or infrastructure to support work of this nature, and that gallery arts institutions could not adequately engage with the specifically musical aspects of it; the frequent result was that this work was falling through institutional cracks, despite the fact that artists were making it at a high level.

What will you perform at Artpark, July 10?

We’ll be giving a continuous 2-hour performance that weaves together interpretations of 1960s scores by Yoko Ono and Ben Patterson with the premiere of a new score of mine. In these linked interpretations, we aim to examine the cultural/political foundations of the (US) public park through music. We’re trying to complicate certain common sense understandings of “Nature” and “public space” by underlining how the park’s dynamics in the past and present are undergirded by racial and colonial power; I’ve written in detail about the project here. With Null Point, programming is always highly specific to a particular performance situation; in the case of the upcoming performance, the location is the object of investigation.

Are there conceptual or thematic similarities between the works you’ll perform?

All three works are interpreted in ways that aim to position the public park culturally and politically. The performance will feature spoken/recorded linguistic annotations of the park’s environment; this part of the performance is a realization of Ben Patterson’s A Disturbing Composition (1961), a framework for creating a series of “disturbances” (i.e. the annotations might disturb certain conventional understandings of the public park), and of a new score of mine which suggests ways of foregrounding the spatial politics of a “Natural” environment. As the public park is historically linked to idealized notions of pastoral Nature, in the performance, oboe, cello, and electronics (re)interpret well-known classical music and “nature sound” renderings of the pastoral. We are approaching these musical/audio pastorals through Yoko Ono’s Hide Piece —(which consists of the notation “hide”)—because of the way in which the pastoral’s idealization of nature occludes (and yet re-enacts) colonial and racial power dynamics. I’ve written about this in more detail here.

Do people find any of this inaccessible? Daunting? What would you say to those people?

As with any work that investigates unprecedented artistic possibilities, there have been a range of responses. Generally, we work in a concept-driven way, pushing a concept as far as we can, and this often results in performances and other events that challenge received foundations of music making. As a result, it may be difficult for some listeners to engage with the work as music. However, the concepts that we investigate are by design worldly in nature, which offers a range of alternative entry points. For instance, Saturday’s performance is ultimately about Artpark as a socio-ecological space—we’re approaching music as a way of foregrounding aspects of the location which might not be apparent from the standpoint of certain everyday modes of perception. Additionally, in this performance, we’ll be (re)interpreting excerpts of well-known music and audio pieces; and we’ll be doing all this in ways that foregrounds and interrogates foundational ideas about US nationhood.

Saturday’s performance, like other extended performances we give, inhabits time in a loose, relaxed, non-narrative way that is highly distinct from the conventions of much popular and classical music. The resulting performance environment is meant to be engaged with actively and creatively: we encourage listeners to walk around, listen to how the music sounds in different locations, let your attention wander, approach the music as a soundtrack to a stroll, take pictures, listen to how the music relates to ambient sounds, chat quietly, sit down and close your eyes, leave the performance area and come back, etc.

Finally, like any music and art, our work emerges out of conversation with an international community of practitioners who have been asking parallel questions for a long time, in some cases since the 1950s. Accessibility is not per se intrinsic to any particular musical contents, but is a function of a listener’s learning about a particular community of musical practice. If people would like to learn more about the broader musical community of which we’re a part, there’s plenty of documentation and text on our website; I would also recommend looking up our collaborators, many of whom have an active web presence.

Null Point: Nature Is Not Natural will take place in Artpark's outdoor, Emerald Grove performance space, Saturday, July 10 from 4 to 6 p.m. More info about the free performance is here.