Summer is for families at Artpark, where afternoons are filled with creative hands-on discovery (arts and crafts, stories, and workshops) and live performances for all ages. Did we mention that it's all FREE?!!

See below for a full schedule of performances and activities for the season!

July 16: The Art of Puppetry

Workshops under the Amphitheater awnings: 12-4PM

Performance: Squonk Opera at 2 and 4PM

Currently celebrating its 30th anniversary, Pittsburgh’s Squonk Opera is an original progressive rock group that defies categorization. Their new production "Hand to Hand" features ‘The Squonkers’ as they manipulate enormous puppet hands to tell a spectacular and comic story. In this rock opera melee, giant thumbs detach to become truly opposable and challenge each other with guitars. Featuring original chamber rock music and an opportunity for audience members to come together, Hand to Hand encourages shared discovery and making a community of the imagination. Click here for more info on this performance!

July 23: The Art of Dinosaurs 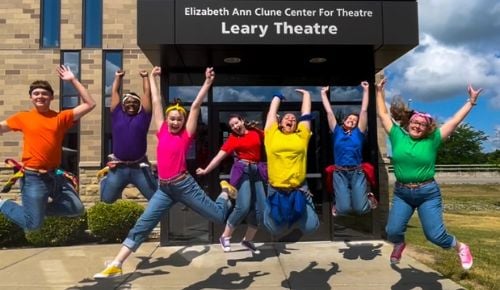 11AM - 1PM
Traditional Haudenosaunee Storytelling and Lacrosse workshop
Lacrosse, also known as the Creator’s Game, is a traditional game of the Haudenosaunee (sometimes called Iroquois) and has been played in this area for centuries. Join Perry Ground (Onondaga, Turtle Clan) to learn the basics of the game such as cradling, shooting, and catching the ball. Learn about the history and culture of this great game while participating in interactive activities with indoor (safe) lacrosse balls for beginning players.


Workshops under the Amphitheater awnings 12-4PM:

Performance: Niagara University Repertory Theatre (NURT) in the Amphitheater at 1 and 3PM

July 30: The Art of Balance

11AM - 1PM
Acoustic Storytelling with Tonemah
Award winning Tuscarora singer-songwriter will share Native stories from his experiences and relationships he has made along his journey. His organic storytelling style has become his trademark. Tonemah's life experiences of growing up on, and off, reservations coupled with his professional undertakings have given Tonemah a truly unique perspective that he brings to his songwriting and stories.

Workshops under the Amphitheater awnings from 12-4PM:

Performance:  Cirque Barcode & Acting for Climate will perform Branché in the Emerald Grove and lower park at 2PM.

Audiences were blown away by their performance during our Power of Niagara event last year! Branche: an acrobatic celebration of nature that also reflects the challenges humanity faces with the climate crisis. Branché is a collaboration between Cirque Barcode and Acting for Climate Montreal. It is a show to address the climate crisis, created in a way as to have minimal impact during creation and while touring. Designed to be played in parks or forests and centered on group acrobatics, Branché is a celebration of the strength of community and our relationships to each other and to nature. It is a show to get people outside and inspire them as to what is possible if we work together.

Workshops under the Amphiteater awnings from 12-4PM:

Performance: WindSync: Peter and the Wolf at 1PM in the Amphitheater

Members of Houston-based wind quintet WindSync will perform "Peter and the Wolf" by Sergei Prokofiev. In addition to telling a story through music, the group will educate students about the instruments they use and other elements of their performance. WindSync will also perform a more 'serious' program on Sunday, August 7th as part of our New Music In The Park series.

August 13: The Art of Food
Arts and crafts activities from 12-4PM at the Lewiston Arts Festival on Center St. near Stuart Sports:

Performance: Farm Art Collective's “The Scientists” 3PM in the Emerald Grove at Artpark

Free Family Saturdays are supported in part by the Garman Family Foundation administered by the Community Foundation for Greater Buffalo.

Questions: email us at [email protected]