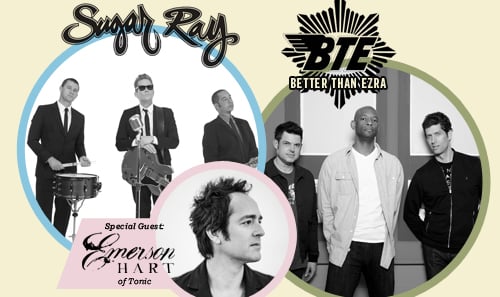 with emerson Hart of tonic

Sugar Ray’s breakthrough hit song “Fly” put them on the map in 1997 and rocketed front man Mark McGrath to pop-star status. They later followed with hit singles “Every Morning,” “Someday,” “Falls Apart,” and “When It’s Over” and have sold over 8-million albums.

Formed in 1988, Better Than Ezra’s hummable melodies, guitar riffs, and confessional lyrics have made them an enduring force in rock music. Their hits “Good,” “Desperately Wanting,” and more secured their spots on Billboard’s 100 Greatest Alternative Songs and Alternative Artists of All-Time lists. The band remains active in the studio and on the road with their popular live show.

Emerson Hart, front man and songwriter for Tonic, merges raw honesty of rock with unabashed melodies that has resulted in six top 10 singles and such hits as “Open Up Your Eyes” and “If You Could Only See.”