Sō Percussion returns to Artpark after their breathtaking performance in 2021, this time with special guest Shodekeh to perform the WNY premiere of “Vodalities: Paradigms of Consciousness for Human Voice” which they debuted at Carnegie Hall in December. The piece was written for the ensemble by Shodekeh Talifero, the first professional breath artist and beatboxer to present a compositional work at the legendary venue. 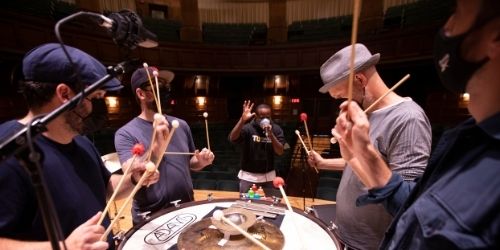 With innovative multi-genre original productions, sensational interpretations of modern classics, and an “exhilarating blend of precision and anarchy, rigor and bedlam,”

(The New Yorker), Sō Percussion has redefined the scope and role of the percussion ensemble, placing it at the leading edge of 21st-century music.

“Through a mix of consummate skill and quirky charm, this mercurial quartet has helped to ignite an explosive new enthusiasm for percussion music old and new.” –The New York Times

With 34 years of personal, professional, and community-based experience, Shodekeh Talifero continues to make musical strides as a groundbreaking and highly adept beatboxer, vocal percussionist, and breath artist who pushes the boundaries of the human voice within and outside the context of Hip Hop music and culture.

Check out a video of Shodekeh performing this program with the University of Michigan's percussion ensemble:

Carry-in chairs or blankets are welcome. Refreshments will be available.


Tickets: $12
Click here to purchase
Online ticket sales end two hours prior. Tickets will also be available at the concert.

Sō Percussion’s original productions – including From Out A Darker Sea, Where (we) Live, and Jason Treuting’s Amid the Noise – employ a distinctively 21st century palette of original music, artistic collaboration, theatrical production values and visual art, yielding powerful explorations of the human experience.

In December 2019, Sō Percussion made a triumphant return to Carnegie Hall for a sold-out performance of “A Percussion Century,” a sprawling exploration of the modern percussion repertoire including works by composers Cage, Lang, Reich, and Xenakis as well as works by Carlos Chávez, Johanna Beyer, and the New York premiere of Sō’s newest commission, Forbidden Love, a string quartet by Julia Wolfe. Other 19/20 highlights include a Miller Theatre Composer Portrait of frequent Sō collaborator, Caroline Shaw (with whom Sō has a new album due this season); David Lang’s man made and Lully’s Le Bourgeois gentilhomme with Louis Langrée and the Cincinnati Symphony; dates in Paris, Lithuania, and throughout the US. Sō also collaborated with choreographer John Heginbotham on a new ballet, RACECAR, premiered as part of The Washington Ballet’s season-opening production, NEXTsteps.

This season Sō celebrates its sixth year as the Edward T. Cone Performers-in-Residence at Princeton University and welcomes the appointment of flutist, composer, and vocalist Nathalie Joachim as the ensemble’s inaugural Andrew W. Siegel Composition Fellow. 19/20 also marks the release of album collaborations with Dan Trueman and the JACK Quartet (Songs that are Hard to Sing, from New Amsterdam), and with indie duo Buke and Gase.

Sō has recorded more than 20 other albums; appeared at Carnegie Hall, Lincoln Center, Walt Disney Hall, the Barbican, the Eaux Claires Festival, MassMoCA, and TED 2016; and performed with Jad Abumrad, JACK Quartet, the Mostly Mozart Festival Orchestra, and the LA Phil and Gustavo Dudamel, among others.

Rooted in the belief that music is an essential facet of human life, a social bond, and an effective tool in creating agency and citizenship, Sō Percussion enthusiastically pursues a growing range of social and community outreach.  Examples include their Brooklyn Bound presentations of emerging artists and composers; commitments to purchasing offsets to compensate for carbon-heavy activities such as touring travel; and the Sō Percussion Summer Institute (SōSI), an intensive two-week chamber music seminar for percussionists and composers. Now in its second decade, SōSI features community performances, new work development, guest artist workshops, and an annual food-packing drive, yielding up to 25,000 meals, for the Crisis Center of Mercer County through the organization EndHungerNE.

SHODEKEH TALIFERO
Vodalities: Paradigms of Consciousness for the Human Voice

Shodekeh Talifero continues to make musical strides as a groundbreaking and highly adept beatboxer, vocal percussionist, and breath artist who pushes the boundaries of the human voice within and outside the context of hip-hop music and culture. He formally served as a dance technique musician and composer-in-residence for Towson University’s Department of Dance for 12 years and is the founding director of Embody, A Festival Series of the Vocal Arts, which strives for artistic and cultural convergence through a variety of vocal art traditions such as opera and throat singing to the many forms of vocal percussion. Talifero now serves as the university’s first innovator-in-residence. Over the years, Talifero has moved from beatboxing’s hip-hop roots to explore innovative and convergent collaborations with a wide range of traditional and classical artists. He serves as the beatboxer and vocal percussionist for the globally renowned Alash, one of the world's leading Tuvan throat-singing ensembles.

In the Composer’s Own Words:

Vodalities: Paradigms of Consciousness for the Human Voice seeks to illuminate the different modalities of the vocal arts utilized by not only me, but vocalists the world over. Through three movements composed specifically for Sō Percussion—with each focused on the vocal modalities, or “vodalities” of Breath Art, Vocal Percussion, and Beatboxing—Sō’s challenge was to listen to, learn, and (of course) enjoy each vocal movement, transcribe the pieces from a hip-hop–based oral tradition construct to a system of Western notation, and finally through “technique transcription” to figure out which physical, percussion-based instruments and which members of the ensemble using those tools would be best suited to play each element of the overall compositional structure. In other words, welcome to the 21st century, where compositional paradigms and a synthesis of learning styles can take on a whole new reversal of impact, influence, and imagination. — Shodekeh Talifero