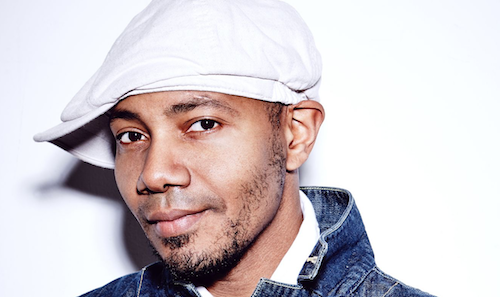 Paul Miller AKA DJ Spooky brings his unforgettable transcendental sound to Artpark trails with a high energy electronic music experience, premiering three news tracks for park visitors to hear first, via the mobile app. You can take these heart racing beats for a run or bike ride through Artpark to experience the trails in a whole new way.

The Buffalo News’ Jeff Miers had this to say after experiencing Sonic Trails:

“In a flash, I felt the power of the land and the presence of those who had passed through it. Not in some Hallmark Channel, neatly wrapped-with-a-bow manner. But through a strong and deep mini-epiphany that was both exhilarating and profoundly sad.”

Available daily from dawn until dusk until December 3rd

Due to the amount of music contained within the experience we recommend downloading this app before you arrive at Artpark.

Paul D. Miller aka DJ Spooky is a composer, multimedia artist and writer whose work immerses audiences in a blend of genres, global culture, and environmental and social issues. His written work has been published by The Village Voice, The Source, and Artforum, among others, and he is the Editor of Origin Magazine. Miller’s work has appeared in the Whitney Biennial; The Venice Biennial for Architecture; the Ludwig Museum in Cologne; Kunsthalle, Vienna; The Andy Warhol Museum in Pittsburgh, the Miami/Art Basel fair, and many other museums and galleries. Miller’s award-winning book “Rhythm Science” was published by MIT Press 2004, and was followed by “Sound Unbound,” an anthology about electronic music and digital media, in 2008. “The Book of Ice”, an experiential visual and acoustic portrait of the Antarctic, was published in 2011 by Random House. Miller has collaborated with a vast array of recording artists, ranging from Metallica to Chuck D; Steve Reich to Yoko Ono. His large scale, multimedia performance pieces include “Rebirth of a Nation,” “Terra Nova: Sinfonia Antarctica,” which was commissioned by the Brooklyn Academy of Music for the Next Wave Festival 2009, and “Seoul Counterpoint”, written during his residency at Seoul Institute of the Arts in 2014. Miller was the first Artist in Residence at the Metropolitan Museum of Art, where he premiered his work “A Civil War Symphony” in 2013.

In 2014, Miller was named a National Geographic Emerging Explorer, an honor recognizing visionaries at the forefront of global problem solving. Recent projects include “Peace Symphony,” commissioned by UN Peace Boat, “Hidden Code,” a new planetarium show commissioned by Dartmouth College in collaboration with Museum of Science Boston, “Forest Symphony” commissioned by Oregon State University, the CD/DVD of “Rebirth of a Nation” on Cantaloupe Music, and the publication of his fourth book “The Imaginary App” from MIT Press. Miller is the 2018 recipient of the The Hewlett 50 Arts Commission Award which will support the creation of “QUANTOPIA: The Evolution of the Internet" a multimedia performance and an installation based on the history and evolution of the internet, which premiered at San Francisco's YBCA in January 2019 to a sold out house. Latest album releases include "Phantom Dancehall" with premier reggae label VP Records and his first blockchain album "The Invisible Hand."