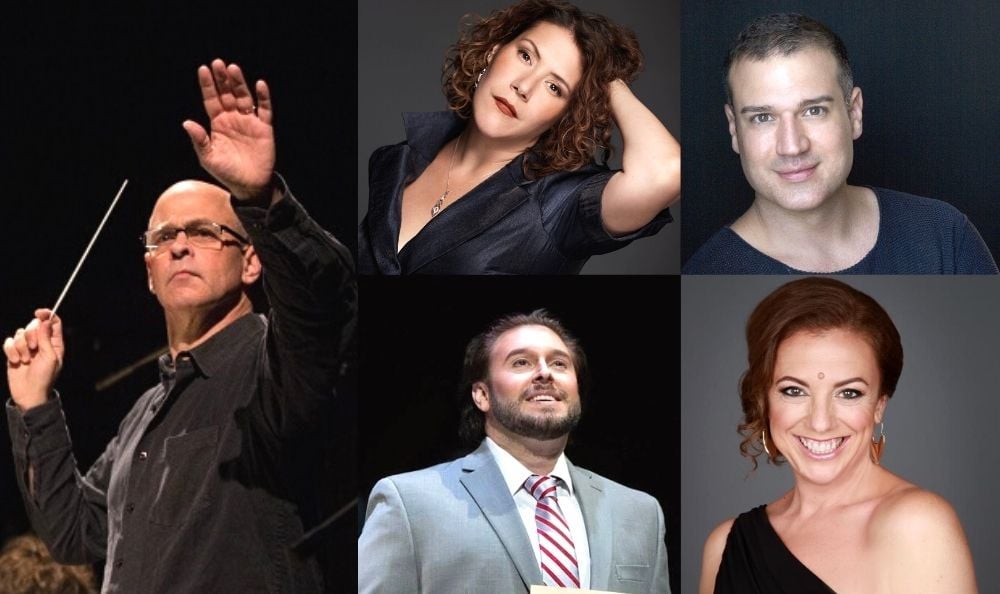 OPERA IN CONCERT AT ARTPARK: UP CLOSE AND PERSONAL


This concert is SOLD OUT

Join us in the Mainstage Theater for an intimate opera concert featuring the Buffalo Philharmonic Orchestra conducted by Gil Rose along with vocalists Danielle Talamantes (Soprano), Janna Baty (Mezzo Soprano), Dominick Chenes (Tenor) and Michael Chioldi (Baritone). The program, curated by Gil Rose, will delight both seasoned and casual opera music lovers alike with opera’s most memorable melodies and moments by Verdi, Bizet, Gounod, Puccini and Rossini. The audience will be seated on the stage along with the performers and orchestra.

Chairs will be provided for all guests.

Renowned opera producer, conductor and stage director Gil Rose has been engaged for an extended residency at Artpark to explore the feasibility of new opera programming and development of an Artpark Opera Strategic Plan with a potential live production. He is a musician helping to shape the future of classical music. Acknowledged for his “sense of style and sophistication” by Opera News, noted as “an amazingly versatile conductor” by The Boston Globe, and praised for conducting with “admiral command” by The New York Times and has been called “one of the most adventurous conductors in the world” by KUSC Radio. Over the past two decades he has built a reputation as one of the country’s most inventive and versatile conductors. His dynamic performances on both the symphonic and operatic stages as well as over 100 recordings have garnered international critical praise.

Among his numerous professional career accomplishments, he founded the Boston Modern Orchestra Project (BMOP), the foremost professional orchestra dedicated exclusively to performing and recording symphonic music of the twentieth and twenty-first centuries. BMOP has won 14 ASCAP awards for adventurous programming and was the first symphony orchestra selected as Musical America’s Ensemble of the Year in 2016. Also in Boston, he introduced a new company to the opera scene, Odyssey Opera, dedicated to eclectic and underperformed operatic repertoire. Odyssey Opera has continued to receive universal acclaim for its annual festivals with compelling themes and unique programs, presenting fully staged operatic works and concert performances of overlooked grand opera masterpieces.

Mr. Rose maintains a busy schedule as a guest conductor on both the opera and symphonic platforms. He made his Tanglewood debut in 2002 and in 2003 he debuted with the Netherlands Radio Symphony at the Holland Festival. He has led the American Composers Orchestra, Warsaw Philharmonic, National Symphony Orchestra of the Ukraine, Cleveland Chamber Symphony, Orchestra della Svizzera Italiana, and National Orchestra of Porto. In 2015, he made his Japanese debut substituting for Seiji Ozawa at the Matsumoto Festival, and in 2016 made his debut with New York City Opera at the Appel Room at Jazz at Lincoln Center. He has since returned to City Opera in 2017 (as Conductor and Director) and in 2018 as Conductor in Zankel Hall at Carnegie Hall. In 2019, he made his debut conducting the Juilliard Symphony.

As an educator, he has served on the faculty of Tufts University and Northeastern University, and has worked with students at a wide range of colleges such as Harvard, MIT, New England Conservatory, Carnegie Mellon University, and the University of California at San Diego, among others. He has curated the Fromm Concerts at Harvard three times and served as the first curator of the Ditson Festival of Music at Boston’s Institute of Contemporary Art. In 2007, Mr. Rose was awarded Columbia University’s prestigious Ditson Award as well as an ASCAP Concert Music Award for his exemplary commitment to new American music. He is a six-time GRAMMY® Award nominee and in 2020 won the GRAMMY® as both Conductor & Producer in the Best Opera Category. Learn more

About Danielle Talamantes:
“It’s not often that an operagoer is fortunate enough to witness the birth of a star!,” was noted of Soprano Danielle Talamantes’ recent turn as Violetta in “La Traviata” with Hawaii Opera Theatre. Recent performances include roles in Bizet’s “Carmen” and Verdi’s “Nabucco” with The Metropolitan Opera; Catán’s “Il Postino” with Virginia Opera; Beethoven’s “Fidelio” with Princeton Festival; “La Traviata” with Finger Lakes Opera; “La Bohème” with St Petersburg (FL) Opera; the title role of “Susannah” with Opera Roanoke; “Don Giovanni” with Cedar Rapids Opera Theater; and a début at Spoleto Festival in Cavalli’s “Veremonda.” She also has several recordings on the MSR Classics label. Learn more

About Janna Baty:
Praised by the Boston Globe for “a rich, viola-like tone and a rapturous, luminous lyricism,” mezzo-soprano Janna Baty enjoys an exceptionally versatile career as a mezzo soprano and as an educator. She has sung with Boston Symphony, Los Angeles Philharmonic, Daejeon Philharmonic, Hamburgische Staatsoper, L’Orchestre National du Capitole de Toulouse, Royal Philharmonic Orchestra, Tallahassee Symphony, Tuscaloosa Symphony, South Florida Symphony, Longwood Symphony, Hartford Symphony, the Orquesta Filarmónica de Bogotá, Opera Theatre of St. Louis, Eugene Opera, Opera North, and Boston Lyric Opera. As a soloist, chamber musician, and recitalist, she has performed at festivals worldwide, including the Aldeburgh and Britten Festivals in England, the Varna Festival in Bulgaria, the Semanas Musicales de Frutillar Festival in Chile, and the Tanglewood, Norfolk, Monadnock, and Coastal Carolina festivals in the U.S. Ms. Baty is very proud to have enjoyed a long collaboration with conductor Gil Rose and Boston Modern Orchestra Project. An alumna of Oberlin College and the Yale School of Music, she began her career as a teacher at the University of Massachusetts Amherst, and joined the faculty of the Yale School of Music in 2008. Learn more

About Michael Chioldi:
American baritone Michael Chioldi has quickly gained the reputation as one of the most sought-after dramatic baritones of his generation having received acclaim from critics and audiences for his portrayals of the dramatic baritone roles of Verdi, Puccini, and Strauss. His many credits  include the title roles in “Die Fliegende Holländer,” “Rigoletto,” “Nabucco,” “Macbeth,” and “Nixon in China,” “Don Carlo,” “Il Trovatore,” “La Traviata,” “Andrea Chenier,” “Tosca,” and “Madama Butterfly.” He has performed with the Metropolitan Opera, Seattle Opera, New York City Opera and more. He has also performed at nearly every major American opera house, including San Francisco Opera, Houston Grand Opera, Washington National Opera, Los Angeles Opera, Palm Beach Opera, New Orleans Opera, Michigan Opera Theater, and Utah Opera. His performance of Sharpless in the New York City Opera’s production of “Madama Butterfly” was broadcast on the PBS television series Live from Lincoln Center, which received an Emmy award in 2008. Internationally he has performed at the Gran Teatre de Liceu in Barcelona, Opera de Oviedo in Spain, and the Royal Opera House, Muscat. Learn more