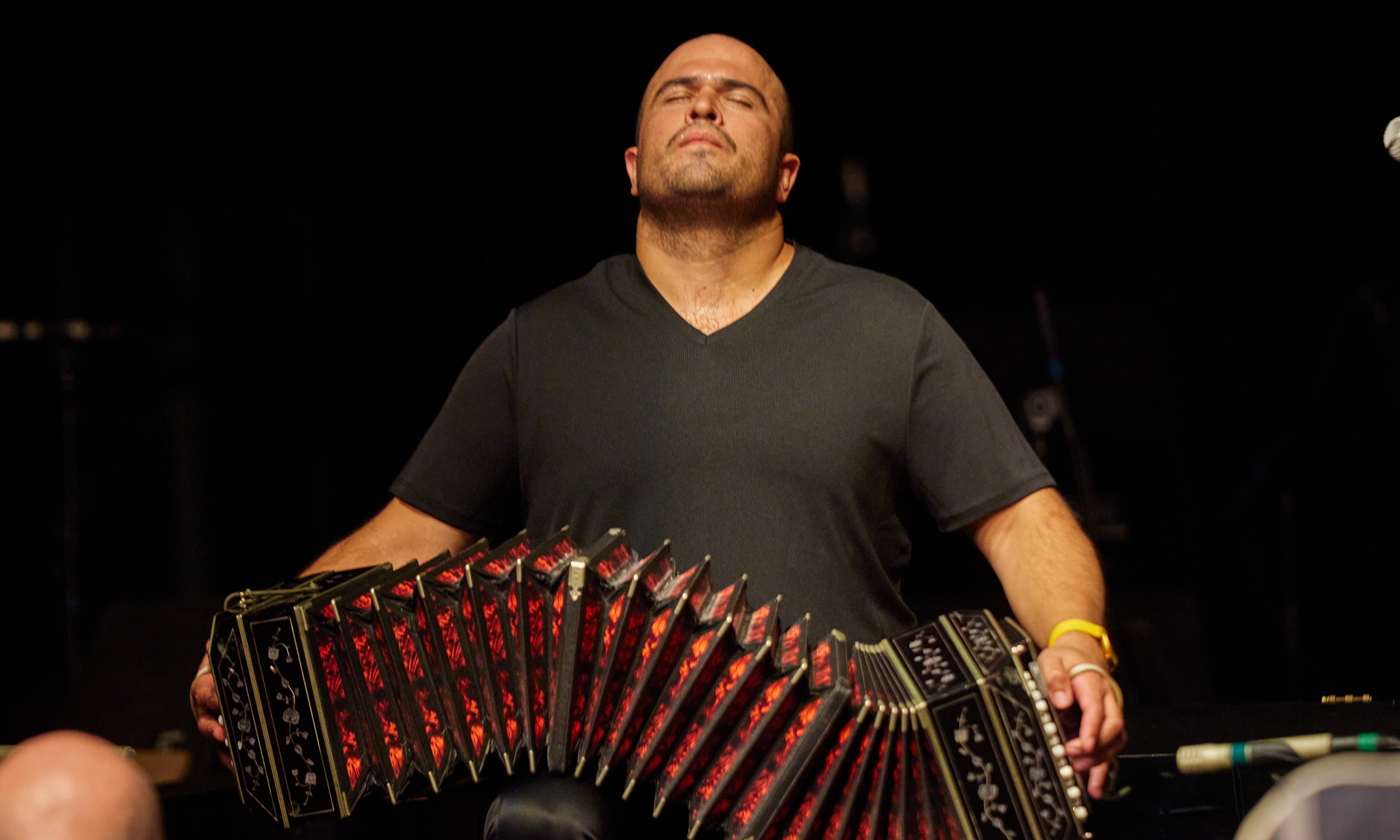 Returning to Artpark after a moving and stunning performance last summer, the New York City-based JP Jofre Hard Tango Chamber Band, was started in 2008 by bandoneonist and composer Juan Pablo (J.P.) Jofre. CNN defined Jofre as "one of the most important Argentinean bandoneonists and composers." The quintet focuses on Jofre’s original works as well as authentic interpretations of legendary composer Astor Piazzolla. Argentinian expatriate JP Jofre, highlighted several times by The New York Times, and praised by Lincoln Center, who called him “one of today’s leading tango artists,” has seen his reputation grow by leaps and bounds. After its debut performance at the Public Theatre in NYC in 2008, the group has appeared at Great Performers at Lincoln Center, Celebrities Series of Boston, and countless venues and festivals worldwide.

The program will feature three world premieres
Both audience and artists will be seated on the Mainstage. Chairs will be provided.

Tickets are $12 and can be purchased here or at our box office (Mon-Sat, 10-4 & at least one hour prior to events)

Important traffic notice: Portions of Center Street will be closed on August 13 for the Lewiston Art Festival. To access Artpark's lower (South 4th Street) entrance for this performance, we suggest accessing South 4th St. either via Cayuga St. or Seneca St.


Here's what an audience member told us about JP Jofre's performance last year at Artpark:

"This performance was one of the most captivating experiences of 2021!  Intimately seated on the Mainstage and led by the passionate bandoneonist compositions of JP Jofre, we were invited on a musical journey like no other.  The enchantment of the hard tango rhythms and chords sang deep to our souls, and then resonated through the space." - Alison Lytle 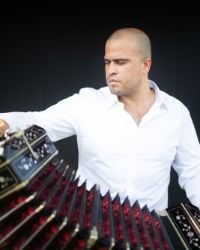 About JP Jofre:
A native of San Juan, Argentina, Juan Pablo Jofre Romarion, aka JP Jofre, is an award-winning bandoneon player and composer. Mr. Jofre has been repeatedly highlighted by the New York Times and praised as one of today’s leading artists by Great Performers at Lincoln Center.

His music has been recorded by the London Symphony Orchestra, multi-Grammy award winner Paquito D’ Rivera, and Orpheus Chamber Orchestra. He has performed and given lectures at Google Talks, TEDtalks, The Juilliard School of Music, The New School and other venues.

A recipient of the National Prize of the Arts grant in Argentina, Mr. Jofre has been part of many prestigious festivals, including the Celebrity Series of Boston, Umbria Jazz Festival, Great Performers at Lincoln Center, and Seattle Town Hall, among others. 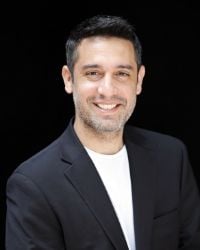 About Pablo Cafici, piano:
Pianist, keyboardist, producer, and composer of many soloist artists and bands around the world, Pablo Cafici began playing guitar and piano at the age of 9 in Mendoza, Argentina. At 15 he formed "Exegesis" his first band. Later on, he attended to the "Escuela de Musica, Universidad Nacional de Cuyo" studying the classical piano career.

Although his formation was in classical music, Cafici always played and produced several bands of musical genres in Argentina and later over the world - Rock, Pop, Tango, Fusion, Reggae, Flamenco, Progressive, Electronic, Metal, and more. 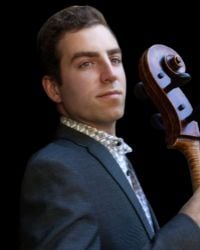 About Thomas Mesa, cello:
Cuban-American cellist Thomas Mesa, has established himself as one of the most charismatic, innovative, and engaging performers of his generation.  He was the winner of the $50,000 First Prize in the 2016 Sphinx Competition and the Astral Artists 2017 National Auditions.  He has appeared as soloist at the Supreme Court of the United States on three occasions and with major orchestras including the Los Angeles Philharmonic at the Hollywood Bowl, The Cleveland Orchestra, and Indianapolis Symphony Orchestra, Santa Barbara Symphony, and New Jersey Symphony Orchestra.

Highlights in the 2022/2023 and 2023/2024 seasons include curating and performing chamber music programs with the Indianapolis Symphony Orchestra, soloist with Sphinx Virtuosi touring at major venues across the U.S. with Jessie Montgomery’s Divided for solo cello and orchestra,  almost 100 recitals, a residency at Colburn Conservatory, and many new commissions, premieres, and recording proejcts.  Venues will include places such as Carnegie Hall, the MET Museum, Philadelphia Chamber Music Society, The Supreme Court of the United States, Colburn School of Music, Kohler Foundation, and many more. 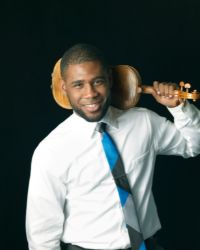 About Rainel Joubert, violin
Cuban-born violinist Rainel Joubert is the Houston Symphony as a Community-Embedded Musician and has performed with the National Symphony Orchestra of Cuba, the Opera and Ballet Orchestras of Havana and has played for many renowned musicians, including Claudio Abbado, Gidon Kremer, Erick Grossman, Ilmar López Gavilán, Paul Kantor, and the Borromeo String Quartet.

His many awards include being named one of the four finalists of the 15th Annual Sphinx Competition, First Prize in the Concerto Competition of the University of Southern Mississippi, and Second Prize in the Violin Competition and Best Interpretation of Cuban Music at the 2006 Union de Escritores y Artistas de Cuba (Cuban Artists and Writers Union).

As a member of Sphinx Virtuosi (SV) he performed in important halls such as New World Center (Miami), Kennedy Center (Washington), Carnegie Hall (New York), and participated in extensive community engagement activities. He speaks three languages (Spanish, Portuguese, and English) and holds a Master’s Degree in Music Performance from the University of Southern Mississippi. 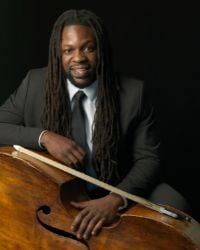 About Chris Johnson, double bass:
Chris Johnson won his first orchestral job in 2007 with the New Haven Symphony. He was the principal bass from 2008-2011 in the Philharmonic Orchestra of the Americas and co-principal of The New York Chamber Virtuosi in 2010. Chris has also filled in as a substitute bassist in Pittsburgh Symphony Orchestra, New World Symphony in Miami as well as the Verbier Festival Orchestra in Switzerland. The summer of 2010 Chris attended the Pacific Music Festival in Japan. In 2013 he won a position in the Allentown Symphony Orchestra in Pennsylvania and 1st place in the International Society of Bassist (ISB) Orchestral Competition. He has been playing with the Chamber Orchestra of New York since 2008.