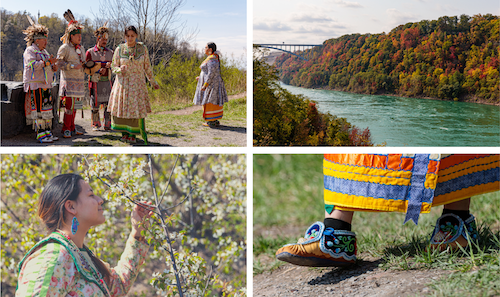 Based on the Haudenosaunee Thanksgiving Address, Her Moccasins Talk (HMT) enables Artpark visitors to become one with the natural world in a uniquely immersive way.

Curated by Indigenous bridge builder Michele-Elise Burnett and featuring local First Nations Knowledge Keepers, storytellers, and singers, HMT takes parkgoers through a mindful journey that will let them experience the landscape through an Inidgenous lens -- guided by the nuturing matriarch's voice and carried along by inspirational songs and sounds.

The path along the Mighty Niagara will help guests look inward, rediscover themselves and reflect on the harmony and balance of all living things.

More information about how to download the app coming soon!

Michele-Elise Burnett, Métis/Algonquin, Bear Clan, is President of Kakekalanicks, an Indigenous arts and consultancy company which educates, enlightens and entertains broad audiences through the promotion of Indigenous art and artists. Ms. Burnett is the co-founder of Landscape of Nations 360°, a unique Indigenous education and tourism initiative. She is Creator and Artistic Director of the Celebration of Nations and the Artistic Producer of Artpark’s Annual Strawberry Moon Festival, both of which provide a far-reaching platform for the community to embrace and honour the unique heritage, diverse cultures, and outstanding achievements of Indigenous peoples. Ms. Burnett has recently been part of multiple large and meaningful art installations and memorials in various capacities including: the Landscape of Nations Commemorative Memorial in Queenston Ont, the Curtain Call installation at the FirstOntario Performing Arts Centre in St. Catharines Ont, the Native American Peace Garden at Artpark, and, launching this May, the Indigenous Site Reactive Audio Journey for Artpark’s trails.

Michele-Elise serves or has served on many Boards and committees where she provides the Inidgenous lens as a way to build stronger cross-cultural relations for a shared future. These include the Board of Trustees for Brock University, the Board of Ridley College, the Aboriginal Education Council (Co-Chair, Brock U), the Niagara 2022 Canada Summer Games Board, the Indigenous Partnership Council for the Canada Games (Chair), and the Indigenous Health Conference 2020 (Co-Chair, University of Toronto). Ms. Burnett is a graduate of the Ryerson University School of Radio and Television Arts. She and her mother were the first Indigenous people in Canada to be granted private broadcasting licenses by the CRTC. Together, they owned and operated Spirit 91.7 FM, the most powerful radio signal in the Niagara Region. In 2018, she was the recipient of the Culture Arts Award from the GNCC Women in Niagara for her success and contributions to the community, and in 2020 was recognized as one of Welland Historical Muesum’s Notable People in their virtual tour.