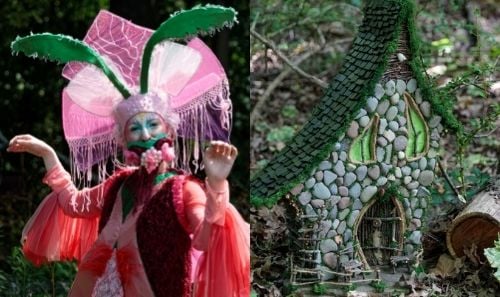 Now in its 11th year, Artpark Fairy House Festival has evolved from an art walk of the miniature fairy houses installed in the park by both local community and professional artists to an international, interdisciplinary and immersive performing arts festival with European street theater groups, modern dance, interactive performances by local actors, and music presented in the setting of the park overlooking the stunning Niagara Gorge.

Visitors can once again marvel at the fairy house creations and enjoy the whimsical and enchanting Artpark Fairies and roaming musicians outfitted in new costume creations by Uta Bekaia.

Artist auditions are now open! If you'd like your creations included in the upcoming festival, Artpark is accepting artist submissions for the June 12th festival until May 31. Find out how to submit here.

Visitors and participating artists should note that this year the Festival will be modified to include contact-free activities and will feature a walk-through tour of artist-created fairy houses, winding through the Artpark woods. While tickets for admittance and Fairy House tour will be sold on a timed basis, guests are welcome to arrive before and/or remain on the grounds after their tour to enjoy other activities and concessions. All activities are subject to New York State COVID-19 Guidelines requiring social distancing, use of facial coverings and other safety measures enforced at the time of the event. Further details will be communicated to participants in advance.