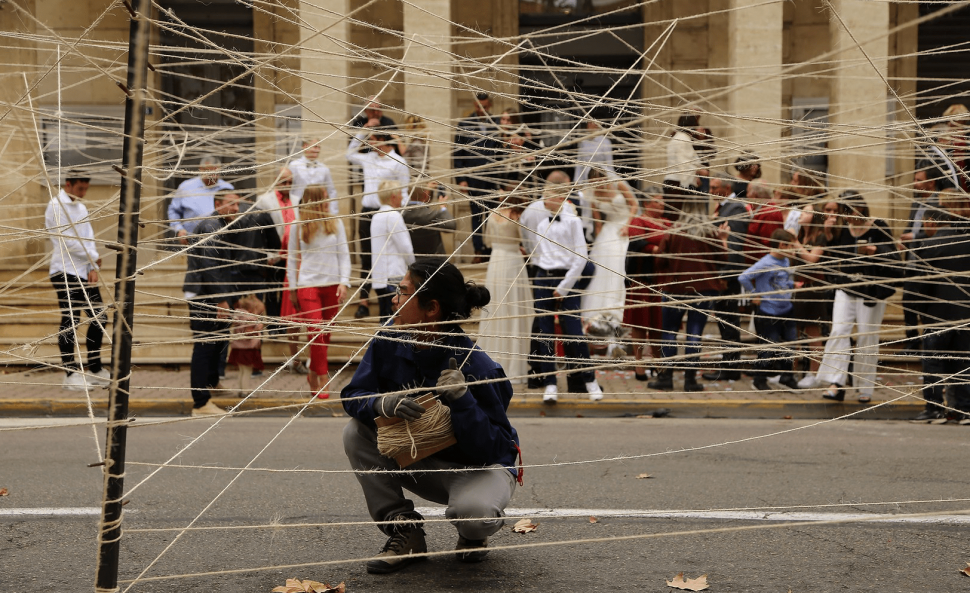 (It’s Not That Way, It’s This Way!) is a communal exercise in the process of reconstruction and deconstruction. A once empty space is now filled with strands like a freshly woven spider’s web. A person approaches a stone on the floor and begins to roll up a string, while another walks toward the middle of the web and contemplates the unraveling tangle of strings. The spectators become actors, passing strands over and under each other. The actors have met, the space becomes a meeting ground and the individual quickly forms a small community. This piece is a meditation on spatial scale and individual’s places in society by South Korean Artist Juhyung Lee. After touring the world, Lee’s latest exploration of these themes comes to Artpark in August.

This playful, political, participatory work invites Artpark audience to negotiate their relationships to space, place, and one another through a designed environment built specifically for each performance.

We couldn’t be more excited to give our community a chance to experience this!

In 2012, while doing his military service, South Korean Juhyung Lee participated in Bivouac by Générik Vapeur at the Seoul Street Art Festival. This encounter was a real turning point, and in 2014, he abandoned his law studies to join Générik Vapeur in Marseille. During his first year at the Cité des arts de la rue, he met apprentices from the FAI-AR (Formation supérieure d’art en espace public) and was inspired to do this training in 2015. In 2017, he created Compagnie Galmae, an artistic company that performs in public spaces. In 2018, he won the Bourse SACD Auteurs d’Espace.

The presentation of Compagnie Galmae has been made possible through FACE Contemporary Theater, a program of FACE Foundation and Cultural Services of the French Embassy in the United States.