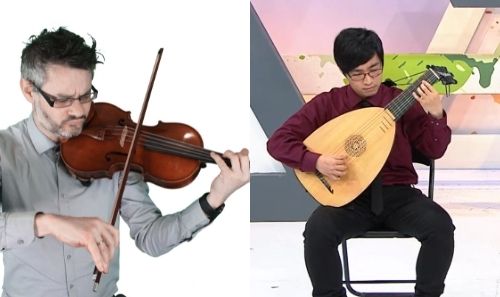 Moshe Shulman writes music for concert halls, theater and opera, and is a performer of classical music, Argentine tango, Klezmer, and Gypsy music. The Russian-born, Israeli composer has studied with Mark Kopytman, David Felder, and Johannes Schollhorn. He received his Bachelor’s and Master of Music degrees in Composition from the Jerusalem Academy of Music, and a Ph.D in Composition from the University at Buffalo (UB).

Lutenist and classical guitarist Kenneth Kam is currently pursuing the Doctor of Musical Arts degree at the Eastman School of Music, where he is a teaching assistant and studies early music, the lute and the Baroque guitar with Prof. Paul O’Dette. Kam is also an active performer, Kenneth has been heard in Beijing, Malaysia, Germany, Austria, Czech Republic and Mexico. In 2017, Kenneth performed the U.S. premier of “Hachiko” written by Fabrizio Ferraro with the Queensboro Symphony Orchestra in New York City.

Soprano Anne Harley teaches voice, music history and interdisciplinary humanities at Scripps College, and specializes in performing music from challenging and ground-breaking contemporary composers as well as music from early oral and written traditions in Europe, America and Russia. She has premiered, performed and recorded works by contemporary composers Evan Ziporyn, John Adams, Lee Hoiby, Louis Andriessen, Peter Eotvös and John Harbison, Jodi Goble, Christine Southworth, Moshe Shulman, Yii Kah Hoe and Chaipruck Mekara, among others. She performs in North America, Europe and Asia and has appeared as soloist with the Boston Modern Orchestra Project (Angels in America), Opera Boston (Nixon in China), American Repertory Theatre (Oedipus), Handel & Haydn Society, Boston Camerata, and at the Banff Centre for the Arts and at the Tanglewood Festival.

Check out our interview with Anne Harley and Moshe Shulman

Check out our Interview with Kenneth Kam about the theorbo

New Music in the Park Sponsor: