The Percussion Garden has been made possible by a generous gift from the Charles D. and Mary A. Bauer Foundation.

Each element of the Percussion Garden presents playful opportunities for visitors to explore the different ways to interact and produce sound while posing curious questions on the nature of a performance, music-making and relationships within the natural environment of the park:

by William Close, 2020
Made possible with funding by Mary E. Knotts 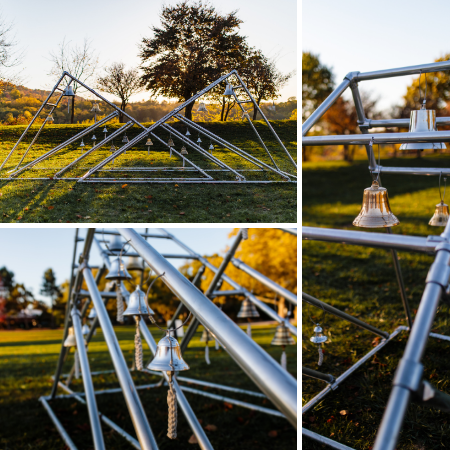 This interactive sound sculpture is a celebration of bells and sonic communication. One bell rings and another responds. Multiple people playing simple bell patterns can work together to create bell music.


The piece is also inspired by two intersecting mountains, architecture, landscape and sailboats. All the bells on the sculpture are of a style actually created for boats. In the past boats would have these bells mounted on deck where they could be rung to communicate with other boats. In the fog or at night they would ring out to let others know their position. 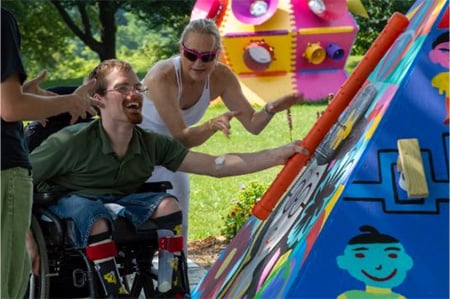 The Artpark Bridges Garden is a painted pyramid sculpture that incorporates different types of percussion instruments with a surrounding garden of greenery and flowers. The Garden was created in a collaborative effort of participants from the Artpark Bridges community engagement program, including People Inc., Empower, artist Brian Nacov and landscape designer Andrew Palinski.

The concept of the piece was born out of a conversation between Artpark and Empower, desiring to give participants of the Artpark Bridges program something they can call their own and serve as a retreat when they visit the park.

The Artpark Bridges Garden is designed by Andrew Palinski.

The pyramid and its instruments are conceived and installed by Brian Nacov. 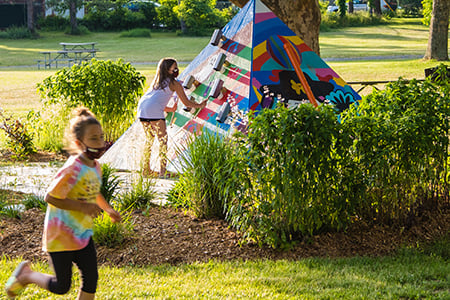 The plants that surround the installation are all native perennials provided by Russell’s Tree and Shrub Farm, LLC.

The garden is ADA accessible, thanks to granite donated by International Stone Gallery of Lockport.

Generously supported by The Rupp Foundation

This interactive sonic sculpture is inspired by various structures found around the world that are created specifically to house Gongs, Giant Bells, and resonant sound. Using resonant aluminum tubes I have created a sort of three-dimensional line drawing of an interpretation of an Asian temple to become the structure to house these beautiful gongs. The gongs come from China.

Gongs are amazing instruments. It is said that within the crescendo of a large gong all frequencies can be heard. Also known as “white noise”. Other places in nature that white noise occurs is in the roar of a rushing river or in the cashing of waves on a beach. It is powerful full frequency sound!

Playing the Gongs: Start tapping or striking the gong gently. This warms up the Gong and produces amazing harmonics and tones. If you want to hear the crescendo strike the gong a bit hander and listen the white noise open up almost like a giant musical flower. Feel the power of the gong as it resonates through the world and into your body. It is a great experience. Please remember they are musical instruments so be gentle with them.  It is an honor to play an amazing gong.


Please do not climb on Gong Temple. It was not designed to be a jungle gym.

William Close has been creating new instruments for over 20 years and has invented over 100 new musical designs. He conceptualizes, designs and builds these musical inventions. In most cases he plays the inventions, though William often has other talented musicians play and perform with the instruments as they find often new ways and styles of creating music with the new instruments! His instruments are featured in all Earth Harp Collective Concerts. His most notable instrument is the Earth Harp, it is the largest stringed instrument on the planet. It was developed by William Close in 1999. The body of the instrument rests on the stage and the strings travel out over the audience attaching to the back of the theater, turning the theater / concert hall, architecture and landscape into the instrument. The giant long strings are played with violin rosin covered gloves. The player runs their hands along the strings creating beautiful cello like tones. The reason it is titled the Earth Harp is due to the fact that the first time it was installed, the strings ran from one side of a valley 1,000 feet across to the other side, turning the Earth / landscape into a giant harp. The Earth Harp has been installed around the world. The strings have stretched to the top of the Seattle Space needle, to temples in Vietnam, in the famous Grand Theater of Macau and the Coliseum in Rome. Additionally, it has draped over amazing architecture in Hong Kong, India, and to the Kennedy Center and Lincoln center in the United States.

William studied sculpture and sound design at the Art Institute of Chicago. His unique combination of sculpture, music and installation art blossomed into a new genera of music making designs. His installations and performances have been experienced throughout the world. William Close is an installation artist and musician. Some of Close's other instruments include the Drum Orb, the Percussion Jacket, the Aquatar, and the Wing harp. William Close is also the Founder and Artistic Director of MASS Ensemble. MASS is an acronym for music architecture sound and sculpture. The group works with Close's unique designs to create music based stage shows that push the envelope of the musical experience. 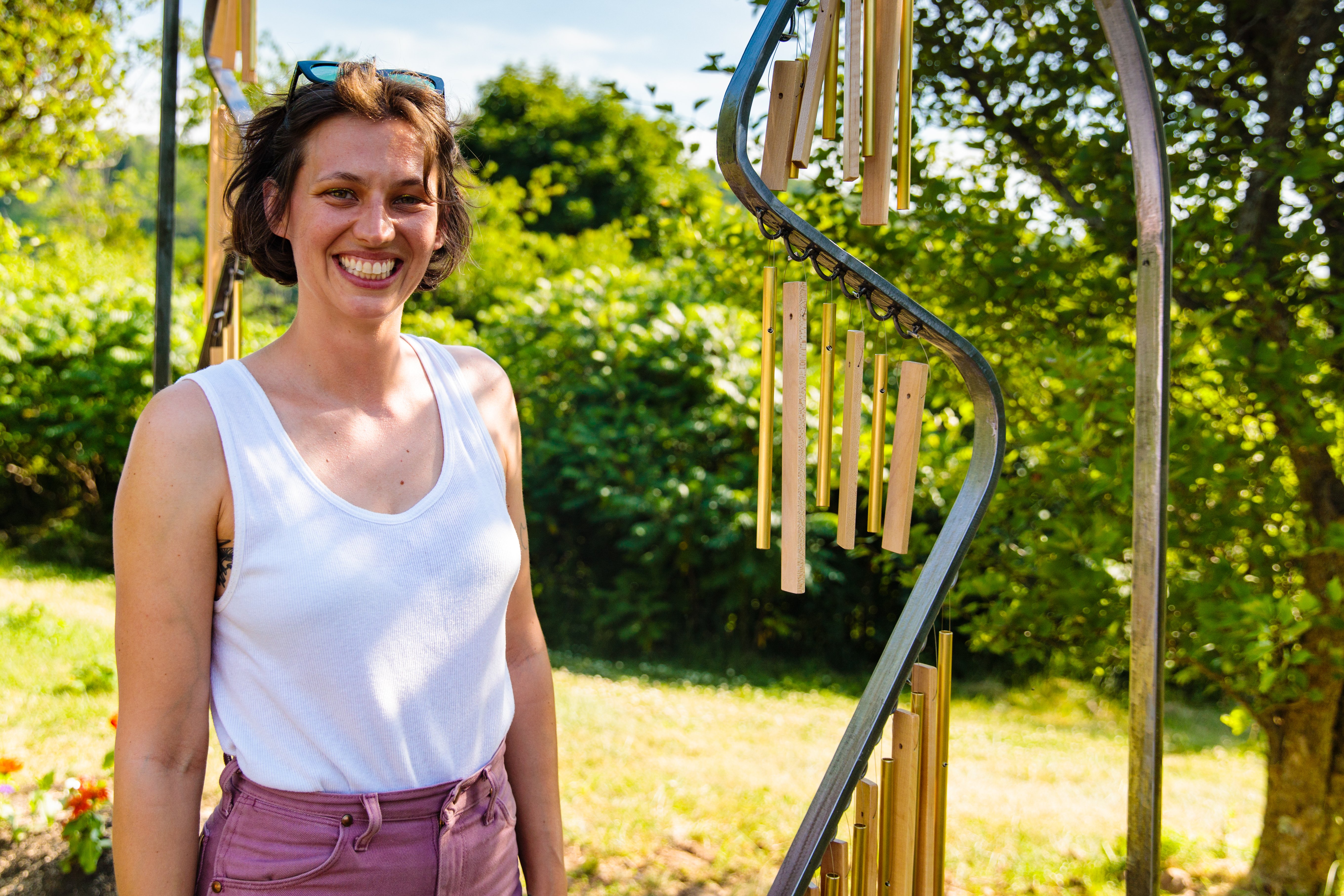 Chime Sprouts is an installation of sound and movement, that is activated by the wind or user. The organic shapes that house the brass chimes stem directly from the earth, to evoke plants sprouting from the ground, like trees or tall grass that magically have the capability of simmering sound when touched by the breeze. Our senses tend to have a bolder reaction to sound in regard to sight and by emphasizing the movement of the wind through the natural materiality of brass metal and solid wood becomes a melodic representation of the invisible movement of the wind.
Since the user can also play a role in the musicality of these art-objects, the touch received by the chimes becomes a collaboration between individual and the air. By noticing the force of the wind as equivalent to our own energies we can restore a connection with nature that perhaps has been lost.
Vanessa Lee Jackson is an artist, designer and craft enthusiast based in Toronto, Ontario. Vanessa creates custom furniture, objects and sculpture using the various mediums of wood, metal, textiles, concrete, dye and paint to arrive at eclectic contemporary designs. Drawn towards surreal, organic shapes, Vanessa seeks to create a balancing point between function and décor within her art-objects.

BEAT BLOSSOM has been removed for maintenance 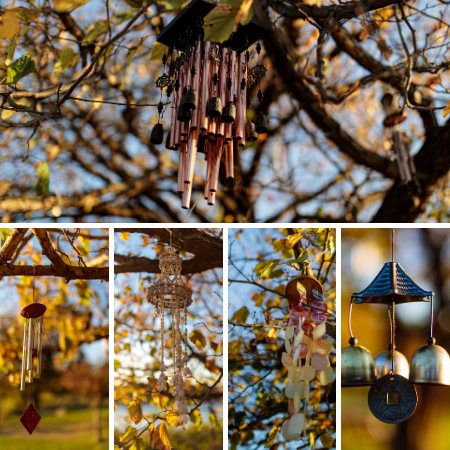 David Cossin is a specialist in new and experimental music, David has worked across a broad spectrum of musical and artistic forms to incorporate new media with percussion. David Cossin has recorded and performed internationally with composers and ensembles including the Bang on a Can All-Stars, Steve Reich and Musicians, Philip Glass, Yo-Yo Ma, Meredith Monk, Tan Dun, Cecil Taylor, Talujon Percussion Quartet, and the trio, Real Quiet.  Numerous theater projects include collaborations with Blue Man Group, Mabou Mines, and director Peter Sellars. David was featured as the percussion soloist in Tan Dun's Grammy and Oscar winning score to Ang Lee's film Crouching Tiger, Hidden Dragon. 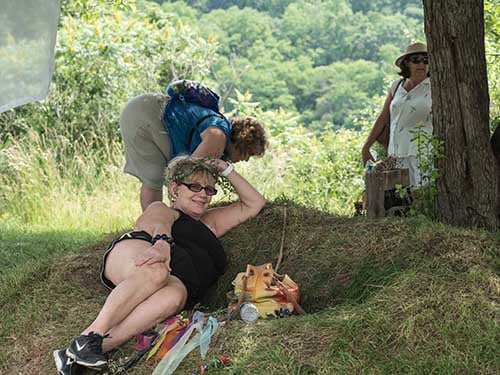 Lawn Chair is an interactive collaboration and site specific work that is meant to encourage the viewer to sit and relax in a seat made of sod.  In making this work, comfort was at the core of construction.  These sod sofas act as a cozy nest for those wishing to take a nap or as a meeting place for friends to sit and relax.  Meditate, read a book or rest, this lawn furniture will provide the loveliest of places for your person.  Enjoy the sounds of the Chime Tree overhead as you gaze upon the Niagara River.

Tanis Winslow has been the Director of Visual Arts and Family Programs for 10+ years. She is a photographer, a painter, a sculptor, an artwork installer, a teacher, and a mother of two.  Her work has been featured in galleries of NYC, Buffalo, NY and Niagara Falls, NY such as, the Albright Knox Art Gallery, Big Orbit, Burchfield Penney, Castellani Art Museum, CEPA Gallery, Gallery MC, and more.